Cobalt is a silver-white ferromagnetic metal with a silver-white surface with a slightly pale pink surface. It is relatively hard and brittle, and has ferromagnetic properties. The magnetism disappears when heated to 1150°C. It does not work with water at room temperature and is stable in humid air. Cobalt is an important raw material for the production of heat-resistant alloys, cemented carbide, anticorrosive alloys, magnetic alloys and various cobalt salts.

The mineralogy of cobalt deposits is diverse and includes both primary (secondary) and secondary (supergene) facies. In primary deposits, most cobalt is recovered from sulfide minerals such as Carolyite  (Cu(Co,Ni)2S4), pyrite  ((Fe,Ni,Co)9S8), magnesite(Co3S4), and magnesite ((Co,Ni)3S4). Arsenide minerals such as skrite ((Co,Fe,Ni)As2-3) and safflower ((Co,Fe)As2).  And sulfur arsenide minerals, including cobalt ore (CoAsS) and green algae ((Co,Fe)AsS). Cobalt-bearing pyrite and pyrrhotite ((Fe,Co)S2 and (Fe,Co)1-xS, respectively) are mined in some deposits.

Among the secondary cobalt-rich phases formed during surface weathering, one of the most historically important minerals is erythritosis (Co3(AsO4)2 • 8H2O), a bright pink mineral also known as cobalt bloom.

Most of the world's cobalt occurs as a by-product of copper mining in sedimentary copper-cobalt deposits that form layered and often layered zones within siliciclastic or carbonate formations. Even some important deposits are giant breccias formed by the dissolution of pre-salt layers. Globally, these deposits are mainly composed of chalcopyrite, pyrite and chalcopyrite, and a small amount of bornite and chalcocite. The gangue minerals mainly include potassium feldspar, muscovite, biotite, albite, quartz and carbonate.

The higher cobalt content deposits of this type are found in the Central African copper belt of the DRC and Zambia. Large deposits in the region that currently or have produced cobalt as a by-product include Kamoto, KOV and Tenke Fungurume, all located in the DRC and Nkana in Zambia.

Laterite is red regolith that forms in humid tropical climates during the weathering of different types of bedrock. Laterite deposits that may contain nickel and cobalt develop on ultrabasic bedrock. Some nickel-cobalt laterite minerals are rich in scandium, but rarely have high concentrations of platinum group elements. Nickel-cobalt laterite deposits are composed of several layers, from top to bottom: overburden, limonite, saprolite and weathered ultrabasic source rocks. In some cases, laterite deposits have belt thicknesses ranging from about 10m to 40m and typically contain more than 1% nickel and less than 0.15% cobalt. In general, limonites developed on ultrabasic rocks tend to have higher cobalt grades, while regolith deposits have higher nickel grades.

The Kalgoorlie and Murrin Murrin deposits in Western Australia and the Goro deposit in New Caledonia are typical examples of the few large nickel-cobalt laterite deposits in the world. In addition, the manganese-bearing Nkamouna Co-Ni deposit in Cameroon is one of the few known laterites, and cobalt is the main valuable metal of this deposit.

Significant cobalt resources are contained in Ni-Cu sulfide deposits in mafic and ultramafic igneous rocks. This type of deposit includes semi-massive to massive sulfides that occur in or near the basement zone of layered intrusive complexes, in uncoordinated magma conduits, and in ultrabasic intrusions and lava flows.

Cobalt mainly exists in cobalt-bearing nickel iron ore, and a small part exists in magnesite. Gangue minerals are mainly composed of native magmatic minerals such as olivine, pyroxene and plagioclase. Since the mineralization process involves the magmatic separation of sulfides, in some deposits, there are also types of hydrothermal flow into post-magmatic structures.

Cobalt is found primarily as a by-product in deposits of this type, including Voisey's Bay in Newfoundland and Labrador, Canada, Sudbury, Ontario, Canada, and Norilsk-Tarnakh, Siberia, Russia. 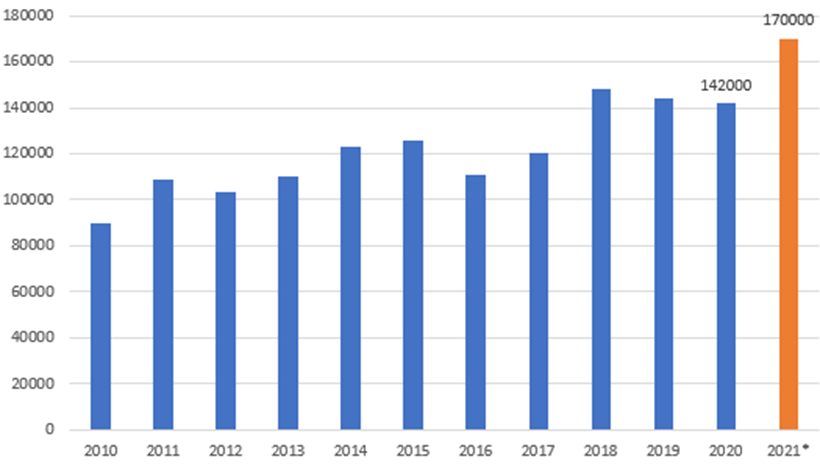 According to the United States Geological Survey (USGS), total global cobalt reserves are estimated at 7.1 million tons, with global production at 140,000 tons in 2020. Divided by country, there are six countries with the largest cobalt reserves in the world, namely Congo, Australia, Cuba, Philippines, Russia and Canada. The specific reserves are as follows:

The Democratic Republic of Congo holds more than 50% of the world's cobalt reserves, with an estimated 3.6 million tonnes of cobalt available for mining in the country. Katanga province has major mining operations, particularly the Mutanda, Kamoto, Etoile and Ruashi projects. A report by the World Economic Forum estimates that as much as 30 percent of cobalt produced in Congo comes from small artisanal mining companies.

Australia has 1.4 million tonnes of cobalt, about 20% of the global share. Its annual cobalt production in 2020 totaled just 5,700 tonnes. By comparison, the Democratic Republic of Congo produces 95,000 tonnes of cobalt.

Given the country's relatively large reserves, Australia has the potential to become a better-known metal producer, as well as an alternative to the Democratic Republic of Congo

About 7 percent of the world's cobalt reserves, at 500,000 tons, are located in Cuba, according to estimates by the U.S. Geological Survey. The country ranks fifth among the world's largest cobalt producers, with national production of about 3,600 tonnes in 2020.

Most of Cuba's cobalt reserves are located in the Moa region in the eastern part of the island and are mined mainly with nickel, Cuba's main mining operation. A joint venture between Canadian miner Sherritt International and Cuban General Nickel produces metal through open-pit mining at the Moa deposit.

Cobalt reserves in the Philippines total 260,000 tons, accounting for about 4% of the world's total, and in 2020 it was the world's fourth-largest cobalt producer after Congo (DRC), Russia and Australia.

Key cobalt operations in the country include the Adlay-Cagdianao-Tandawa project, owned by CTP Construction and Mining, and the Agata DSO open-pit project in Agusantubbe Norte. Cobalt is widely produced as a by-product of nickel mining in the Philippines.

While Russia's cobalt reserves are relatively small at 250,000 tons, the country is the world's second-largest producer of the metal, with a total production of 6,300 tons in 2020.

The Altai Republic in southern Siberia is a well-known cobalt-producing region and is home to the large Karakul deposit. Russia has expressed a desire to expand its domestic cobalt production over the next few years, possibly by as much as 10,000 tonnes a year by 2022. Diversified Russian miner Norilsk Nickel (or Nornickel) is the country's largest producer.

Canada has the sixth-largest cobalt reserves in the world, with total reserves of 220,000 tons, or 3% of the global total.

International giants Glencore and Vale both operate major projects in the country, including the Voisey's Bay, Raglan, Thompson and Fraser mines.

Glencore is the world's largest cobalt miner, with an estimated total production of 25,320 tonnes (MT) in 2021. The company's operations in the Democratic Republic of Congo are expected to increase production in the near term. It includes the restart of the Mutanda mine and increased cobalt production at the Katanga mine.

Eurasia Resources Group is a privately held diversified international mining company with an estimated 2021 cobalt production of 15,000 tonnes. The company describes itself as the world's largest producer of high-carbon ferrochrome and one of the major suppliers of copper and cobalt.

China's molybdenum industry produced an estimated 14,800 tons of cobalt in 2021. In the Democratic Republic of Congo, the cobalt mining company owns 80 percent of the Tenke Fungurume mine, which has one of the highest concentrations of cobalt in the world. Most of Tenke Fungurume's products are reportedly sold for consumption in China.

Gecamines is a state-owned cobalt mining company in the Democratic Republic of the Congo with an estimated cobalt production of 13,860 tonnes in 2021. In early 2021, the company set up a new subsidiary, Societe Generale Enterprises, to control the country's artisanal cobalt mining sector.

The Democratic Republic of Congo (DRC) was the world's largest cobalt producer in 2021, accounting for more than 70 percent of global mine cobalt supply, according to the data. Cobalt production from mines in the DRC increased 22.4 per cent to 120,000 tons. 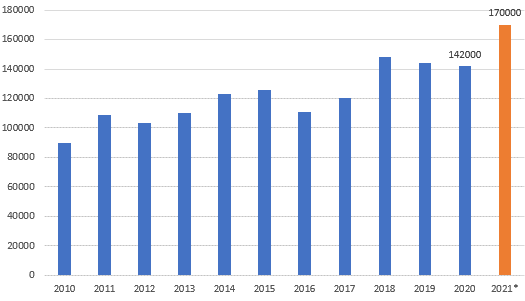 According to the Cobalt Market 2021 Report released this week by the Cobalt Institute ( CI ), the global cobalt market rebounded 22% year-on-year to 175,000 tonnes in 2021 after levelled off during the first phase of the 2019 pandemic.

Importantly, cobalt demand for electric vehicles surpassed other battery applications for the first time in 2021 to become the largest end-use industry, accounting for 34% of demand, totaling 59 KMT. This was helped by electric vehicle sales doubling from 2020 levels, with China accounting for more than half of global sales and 64% of year-on-year growth.

Cobalt supply also resumed growth in 2021, with mine supply rising 12% yoy to 1.6 million tons after declining in 2020. In 2021, the Democratic Republic of the Congo (DRC) produced 74% of the mined cobalt, accounting for 87% of the annual growth rate (15 KMT). It is estimated that production in the artisanal and small-scale mining sector has increased to 145,000 tons by 2021, representing 12% of the total supply in the DRC.

Although cobalt is mostly mined as a by-product of copper and nickel and is somewhat dependent on these industries, global reserves of cobalt remain at a comfortable level.

After the COVID-19 epidemic, traditional cobalt applications such as aerospace and tools are expected to recover, and coupled with a more stable global cobalt market, the prospect of cobalt in the next five years will be more optimistic.