What Are Flotation Methods for Polymetallic Sulfide Ore I

In polymetallic copper-zinc, copper-zinc-sulfur, lead-zinc, lead-zinc-sulfur, copper-lead-zinc and other sulfide ores, the content of copper and lead is generally less than that of zinc. However, the floatability of copper sulfide minerals and galena is better than that of sphalerite, and sphalerite is easily activated by copper sulfide after being inhibited. Therefore, the separation process of suppressing zinc and floating copper and lead is often used. 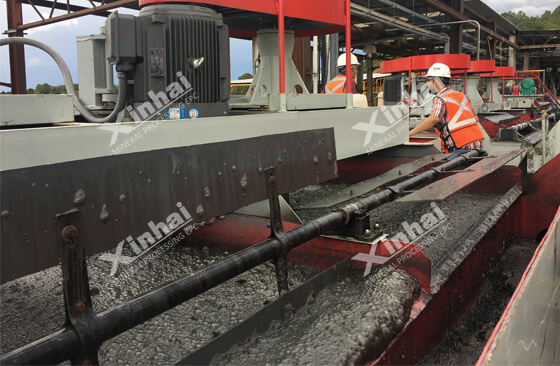 The content of copper in copper-zinc ore is less than that of zinc, but the floatability of copper sulfide minerals is usually better than that of sphalerite, and sphalerite is easily activated after being inhibited. Generally, the method of inhibiting zinc and floating copper is used. In actual production, the priority flotation process is mainly used, followed by the mixed-priority flotation process.

When the content of free copper ions in the copper-zinc-sulfur polymetallic sulfide ore is low, the flotability of sphalerite and pyrite is poor, and the separation is good. Even if no inhibitor is added, good beneficiation indicators can be obtained.

For example, in a copper-zinc-sulfur polymetallic sulfide ore processing plant, the primary copper sulfide accounts for more than 95% of the total copper, and the content of free copper ions is small. Among the zinc minerals, most of the zinc exists in the form of sphalerite, so its floatability is poor. The project uses lime to increase the pH of the pulp, suppresses pyrite, and appropriately reduces the amount of collectors to improve the selectivity of sulfide minerals, thereby realizing the preferential flotation of copper. When zinc is extracted, the lime method is used to inhibit pyrite. Thus, a good beneficiation index was obtained. If the content of free copper ions contained in the ore is large, an inhibitor that reduces free copper ions must be used. At present, the best effect is the sulfurous acid-sodium sulfide inhibition method. Here are more info about flotation reagent selection for copper-lead-zinc flotation.

When the content of iron sulfide minerals in the copper-zinc ore is large, the separation becomes difficult. Especially containing a large amount of pyrrhotite, it will accelerate the oxidation of the ore, and various metal ions will be produced after oxidation, which will increase the "unavoidable ions" in the pulp, making it difficult to suppress sphalerite and iron sulfide minerals, increasing the flotation rate. The consumption of reagents leads to more complicated conditions for copper-zinc flotation separation.

For example, the production of a copper mine in China shows that: low-zinc-sulfur ores are better flotated, sphalerite and pyrite are well controlled, and copper, zinc, and sulfur separation indicators are higher; while high-zinc-sulfur ores, pyrite are difficult to inhibition, it is easy to make the copper concentrate with high sulfur content and poor product quality, and at the same time have a serious impact on the separation of zinc and sulfur flotation. At this time, sulfurous acid can be used as an inhibitor to inhibit the activity of pyrite and sphalerite.

Among them, there are many applications of priority flotation, because it has a simple process structure and does not require chemical removal operations. It is mainly suitable for ore with simple ore material composition and coarse mineral distribution; more suitable for medium and small lead-zinc concentrators.

The mixed concentrate must be removed before flotation and separation, and the commonly used methods of chemical removal are: activated carbon, sodium sulfide and mechanical stirring methods. The main disadvantage of this method is that the process is more complicated.

For coarse, medium and fine unevenly embedded lead-zinc sulfide minerals, extremely complex technological processes such as coarse concentrate, medium ore, tailings regrinding and gravity separation, as well as this section of grinding and this section of flotation can be used.

For lead-zinc sulfide minerals that are embedded in fine-grained or coarse-grained aggregates, and the surrounding rock is less mineralized, heavy media or other beneficiation methods can be used for pre-selection after rough grinding, and part of the tailings are thrown away, and then lead and zinc are directly or regrind. Flotation separation, which can reduce the production cost of beneficiation, increase the processing capacity, and increase economic benefits.

In the polymetallic copper-lead-zinc-iron sulfide ore, the content of pyrite and pyrrhotite is generally high. Because of their good floatability, the quality of the concentrate will be affected during flotation separation, and they are low Valence minerals, therefore, must be suppressed. Pyrite and pyrrhotite are the main raw materials for the sulfuric acid industry, and they are usually recovered. Pyrrhotite has high magnetic properties and can be processed by magnetic separation or flotation.

Zinc-sulfur ore is relatively rare. In lead-zinc-sulfur, copper-zinc-sulfur, copper-lead-zinc-sulfur and other polymetallic sulfide ores, copper and lead sulfide minerals are usually preferentially flotated to suppress zinc sulfide minerals. In the separation of zinc and sulfur, although the natural floatability of pyrite is better than that of sphalerite, its content is high because it is a low-priced mineral. Lime method is often used to suppress sulfur floating zinc, and copper sulfate is added to activate zinc minerals. Because lime causes strong alkalinity (pH=10.5-12), pyrite is strongly inhibited. At this time, copper sulfate has the best effect of activating sphalerite. Therefore, the floatability of zinc and sulfur occurs. The difference is convenient for flotation separation.

In the beneficiation process of polymetallic copper-lead-zinc sulfide ore, copper-lead mixed flotation is often used to obtain mixed concentrate. There are a lot of excess flotation reagents on the surface of copper and lead minerals and in the pulp, which often have a great impact on flotation separation. Therefore, before separation, the chemical on the mineral surface and in the pulp must be removed first. In production practice, sodium sulfide and activated carbon are commonly used to remove remained reagent.

Copper-molybdenum sulfide ore is mainly composed of bauxite, chalcopyrite and chalcocite, which is one of the main sources of molybdenum concentrate. There are three main separation schemes for the flotation of copper molybdenum ore:

When the molybdenum content in the ore is higher than 0.06%, the method of flotation of molybdenum first and then copper floatation can be adopted.

When the content of sulfide minerals in the ore is very small, the method of preferentially flotation of copper and then flotation of molybdenum can be adopted. But in actual production, this method is rarely used. In preferential flotation, it is often uneconomical to suppress molybdenum and float copper. For this reason, mixed flotation should be widely used to obtain copper-molybdenum mixed concentrates in the case of rough grinding as much as possible, and the total recovery rate of the two should be the highest. Then the mixed concentrate is reground to make the copper and molybdenum sulfide minerals fully dissociated and then separated by flotation.

In copper-nickel sulfide ore, copper and nickel minerals are embedded with fine particle size, close symbiotic relationship, and complex mineral composition, including gangue minerals that are easy to float. Concentrates (containing 25%~30% copper) can only get copper-nickel mixed concentrates, which are semi-separated. Its products are smelted into high nickel matte, and then the copper-nickel flotation separation is carried out. When the copper-nickel concentrate is separated by flotation, because the floatability of copper sulfide is better than that of nickel ore, the process of suppressing nickel floating copper is often used.

Therefore, in the production practice of beneficiation, for the easy beneficiation, mixed flotation is often used, and then the separation is carried out. However, for those refractory ores with a large degree of alteration, it is generally not suitable to use the full separation process. The main reason is that the refractory ores contain a large amount of gangue minerals that are easy to float. The minerals float together, thereby reducing the grade of the copper concentrate.

In the beneficiation of copper and iron ore, the combined flotation-magnetic separation process is often used. First flotation of copper minerals, then magnetic separation of iron minerals, the quality of iron concentrates can be easily guaranteed. There are some differences in beneficiation methods according to the content of associated elements in the ore:

When the ore is low in sulfur, copper flotation is the same as for single copper sulfide minerals.

The iron minerals in the copper-iron ore are mainly hematite, which can be separated by a combined flotation-gravity separation process.