What Are Flotation Methods for Polymetallic Sulfide Ore II

In the antimony-mercury polymetallic sulfide ores, the main metal minerals are stibnite and cinnabar. In the beneficiation practice, there are mainly three processes to separate antimony and mercury: preferential flotation, mixed + preferential flotation, and mineral processing-metallurgical combination. Because the floatability of cinnabar is better than that of stibnite, and the mercury content in antimony-mercury polymetallic sulfide ore is relatively low, generally 0.1%-0.5%,  the antimony suppression mercury float method is usually used.

Step1 Add sodium sulfide to the pulp, adjust the pH value to alkaline to inhibit the activity of stibnite;

Step2 Use a collector with better selectivity to preferentially flotation cinnabar;

Step3 Add the activator copper sulfate to the flotation tailings to flotate the stibnite to separate the antimony and mercury.

Step2 Carry out flotation separation of antimony-mercury mixed concentrate. The stibnite is inhibited by the heavy phenate method, and the cinnabar is preferentially flotated.

The practice in the flotation process of antimony mercury sulfide minerals proves that the beneficiation index of this method is better.

Step2 The mixed concentrate is fed into the shrinking furnace, and the metal mercury is extracted by vacuum method, and the rest remains in the slag

In the antimony-gold sulfide ore, stibnite, natural gold, pyrite and arsenopyrite are four main minerals, and gold often exists in pyrite and arsenopyrite. Arsenopyrite usually contains arsenic, and sometimes pyrite also contains arsenic. Therefore, antimony gold polymetallic sulfide minerals contain high arsenic. During beneficiation, except for the recovery of coarse-grained natural gold by gravity separation, most of them are the separation of stibnite, pyrite, arsenopyrite and other minerals. In practice, there are preferential flotation and mixed-preferential flotation in the process of flotation separation of antimony and gold minerals. There are four commonly used flotation separation methods. 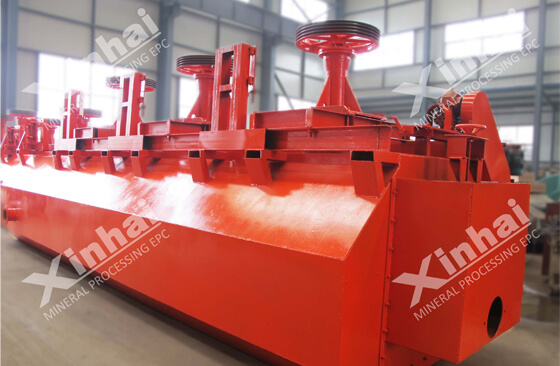 The priority flotation process is adopted, gold is flotated prior to antimony. The specific process is as follows:

Step1 Add sodium hydroxide to the ball mill and grind the ore in the strong alkaline slurry to inhibit the activity of stibnite;

Step2 Use copper sulfate as an activator to activate arsenopyrite and pyrite;

Step4 Add lead salt to the flotation tailings to activate the stibnite, and then add collectors and frothers for flotation to obtain antimony concentrate.

The mixed-priority flotation process is adopted, and the mixed concentrate of antimony and gold is selected first, then flotate gold prior to antimony. The specific process is as follows:

Step4 Add sodium hydroxide, butyl xanthate and copper sulfate to the pulp and inflate it for a few minutes, then carry out flotation separation to obtain gold coarse concentrate, and the product in the tank is antimony concentrate.

Before flotation separation of antimony-gold mixed concentrate, add oxidant bleaching powder or potassium permanganate (pulp solid: liquid = 1:3) and stir for 1 minute to oxidize the surface of mineral particles. Then add 100 g/ton of lead acetate, and use xanthate as a collector to flotate stibnite.

Step2 Using the priority flotation process, adding sulfuric acid to the pulp to obtain a weakly acidic environment, using lead salt as the activator, butylammonium black medicine as the collector, terpineol oil as the foaming agent, and preferentially selecting stibnite to obtain antimony concentrate mine.

Step4 Antimony concentrate also contains a small amount of gold, which can be recovered in the process of smelting antimony.

Step1 After the raw ore is ground, first use jigging or shaking table to select the mixed concentrate of tin-containing polymetallic sulfide minerals, and discard the tailings.

Step3 Then carry out flotation separation, and the tailings are tin concentrate

Gravity-flotation-gravity separation process is suitable for ore containing pyrrhotite generally less than 10%, the symbiotic relationship between cassiterite and various metal sulfide minerals is complex, and useful minerals are mainly in the form of fine grains in ores with uneven distribution of coarse and fine grains. Specific steps are as follows:

Step1 The crude ore is first processed by gravity to obtain a mixed coarse concentrate containing cassiterite-sulfide minerals, and most of the tailings are discarded.

Step2 The mixed coarse concentrate is finely ground and flotated to obtain a mixed concentrate of sulfide minerals.

Step3 The flotation tailings are processed by gravity to obtain high-grade tin concentrate, and part of the tailings are discarded.

The flotation-gravity process is suitable for ore concentrators whose main purpose is to recover tin. When the tin content of the original ore is more than 0.5%, the content of pyrrhotite is relatively high, generally more than 10%, and the tin ore and the metal sulfide minerals in the ore are unevenly embedded in fine grains and closely symbiotic, and this kind of process is mostly used. Specific steps are as follows:

Step1 After the ore is ground and classified, the mixed concentrate is first obtained by mixed flotation.

Step2 The flotation tailings are processed by gravity to obtain tin concentrate and part of the tailings are discarded.

This process is suitable for ore containing tin below 0.5%, polymetallic sulfides and non-sulfide minerals with high specific gravity, and pyrrhotite below 10%, all kinds of minerals are closely symbiotic, and the embedded particle size is uneven. of complex minerals.

When the tungsten-containing polymetallic sulfide ores are sorted, the combined process of gravity separation-flotation is mainly used. When there are many symbiotic magnetic minerals in the ore, a magnetic separation process will also be added. The principle processes for handling this type of ore are as follows:

Step1 The ore is directly processed by gravity after rough grinding, and the sulfide minerals are selected into the tungsten rent concentrate

Step3 The mixed sulfide mineral concentrate is separated by flotation.

It is suitable for tungsten minerals and sulfide minerals that are embedded in fine grains and have complex tungsten-containing polymetallic sulfide minerals. Specific steps are as follows:

Step1 Grind the ore to the particle size required for flotation, and then mix the flotation first to obtain a mixed concentrate of sulfide minerals

Step3 The tailings of mixed flotation are processed by gravity to obtain tungsten concentrate.

If the ore is scheelite, it is recovered by flotation from the flotation tailings. Especially for ores with less tungsten and more sulfide minerals, first consider flotation of sulfide minerals and then recover tungsten from the tailings by gravity separation or flotation. You can read more here about wolframite and scheelite mineral processing technology.

In a word, if the output value of tungsten is large, tungsten minerals are the main object to be recovered first in beneficiation; the recovery of associated sulfide minerals is a secondary product. In order to maximize the comprehensive recovery of tungsten minerals and their associated useful minerals in this type of ore, it is difficult to obtain better results with a single and simple beneficiation process. Therefore, if the ore is mainly wolframite, the beneficiation method used is mainly gravity separation, combined with the technological process of various beneficiation methods. If the ore is mainly scheelite, flotation is the main method to recover various useful minerals.

There are many sulfide ores coexisting with gold and copper. In this type of ores, gold mainly occurs in chalcopyrite and pyrite, and exists in fine particles. Therefore, gold-copper sulfide ore beneficiation often adopts priority or mixed flotation process. By adding lime to the pulp to inhibit pyrite, preferentially flotation of copper sulfide minerals, and finally obtain qualified gold-bearing copper sulfide concentrate.

We have talked about this on the second part in this article.

The main minerals in gold-copper-iron polymetallic sulfide ore are magnetite and chalcopyrite. Natural gold occurs in chalcopyrite as fine particles. The combined flotation-magnetic separation process can effectively separate gold-copper and iron, and finally get gold-copper mixed concentrate and iron concentrate.

If you want to carry out a polymetallic sulfide ore beneficiation project, you can consult us, and we will provide you with a suitable beneficiation solution.